I gave a talk this afternoon at Wisdom 2.0’s first event in Europe with the rather grand title Redesigning not Retreating: The Future of Mindfulness & Technology.

I’ll post the video of the talk when it comes online but in the meantime here is what I think I talked about. Got some really lovely feedback afterwards and would love to hear what you think of it too:

The story starts in the forest. Seven years ago today I was here at Wat Pa Nanachat, a forest monastery in the North East of Thailand (quite a famous place now due the influence of Ajahn Chah and his Western disciples). It’s a pretty hardcore place – certainly to what I’d experienced before. If you wanted to stay for more than three days you have to shave your head – including the eyebrows. And then it was a routine of 3am starts, one meal a day and every week there’d be an all-night sitting from dusk till dawn. And then there are of course the challenges of the forest – for nothing quite tests your practice like stepping barefoot onto a pile of fire ants in the middle on the night.

I was there as part of a 6 month meditation sabbatical from my life as a management consultant in London during which I was spending time practising in various places in Thailand, Sri Lanka & Burma. It was an incredibly important and fruitful six months period of my life. And at the end of it, having learnt so much about myself, about my mind and about practice itself, I had a choice.

On one side was the traditional path – dedicating myself full time to training in a monastic or pseudo-monastic environment. The Theravadan monastic tradition – where the mainstream mindfulness movement has its roots, is a beautiful tradition and I was really quite drawn to that.

And on the other side is a much less well articulated path. It’s a path which looks to explore the contemplative life as far as possible, but to do it whilst in the midst of the messiness of urban, relational, digital life – challenges that just didn’t exist when the monastic route was articulated. And that’s the path I chose. And I chose it because I’m interested in design.

As someone who makes meditation apps, people often ask me what mindfulness has got to do with technology in the first place, and wouldn’t it be better if we just threw our phones away? This point of view is summarised in this idea of the Digital Detox – that switching off is the answer to all our woes related to over overburdening digital experience. And while there is a lot of beauty to the renunciation of that, I have some big problems with the current trend of valorising Digital Detox. And my main problem is that is classes our digital lives and our technology as toxic.

But technology is not the problem.

Bad Technology is the problem. We’ve allowed our awareness and attention to be held hostage. So much of the regular web experience being driven by advertising-revenue, the core mechanic of which is distraction…’Hey, you were reading this thing but here’s a different thing entirely but please please click that because if you do then I get paid’. This is the core mechanic of how web content works and we wonder why our minds are like they are?

And of course, even using the word technology shows that immaturity of the debate given that it’s such a broad term. We need a more nuanced conversation than everything-with-a-screen-or-a-plug is bad, lying down in a meadow is good. What we’re mainly talking about is real-time, always-on, multi-channel comms technologies – that’s email, social media, news, ‘news’, mobile apps and games. Because last time I checked I don’t think anyone was complaining that Wikipedia exists or that we’re able to map hurricane alerts in real-time – so classing all ‘technology’ under one term is a bit limiting.

What’s more, I don’t know if you’ve noticed but this stuff is not going away
So to play the retreat card by turning off and taking a detox, while it definitely can have its short-term benefits, it’s not a long term strategy, either for us as individuals or as a society.

Which brings me to my main message. We need to re-design our technologies, not retreat from them. What do I mean by design? Design isn’t just how something looks, it’s the sum total of all the decisions that lead to something being experienced like it is. It’s what it looks like, how it works, what it leads to and how it feels.

So if we make the generalisation that the reason our mainstream digital lives are so problematic is that distraction is built into our technologies as a primary design objective. The first step we need to take to change the game is to give different things a central position. To make a difference we need to start putting mindfulness as a design objective.

So that when we design our software and hardware, we will measure it’s success by how our awareness, calm and kindness has been supported not just how much advertising revenue we’ve brought in.

And I’m not just talking about mind-training apps, I’m talking about everything. News sites which support concentrated reading. Messaging systems which encourage kindness and compassion to those we communicate with. Phones and tablets which help remember that we have bodies.

All of which will lead those very same phones and tablets no longer being devices of distraction but devices of wellbeing. The good news is that it’s happening already. The massive growth in the use of our devices for physical wellbeing in the last ten years – be that exercise monitoring, food tracking and all the rest has showed that it is possible. The next step is moving from the physical domain to the mental one.

And the key to that will be using the collective skills of designers, psychologists, neuroscientists, technologists and yes even meditators, all working together to create ways in which our technologies support our wellbeing. So that every interaction with our software and our hardware contains the opportunity for practice.

But I’m not an idiot. I’m hopeful and a technoptomist but I’m not an idiot. This is a niche voice in a multi-trillion dollar industry. But then thirty years ago so was the voice of those calling for organic food or fair-trade products. And in the same way that those two movements have grown, I believe that in the next 5-10 years we will see the development of a consumer market for people who say – actually this isn’t ok – and will be ready to pay a premium for mind-positive technology. 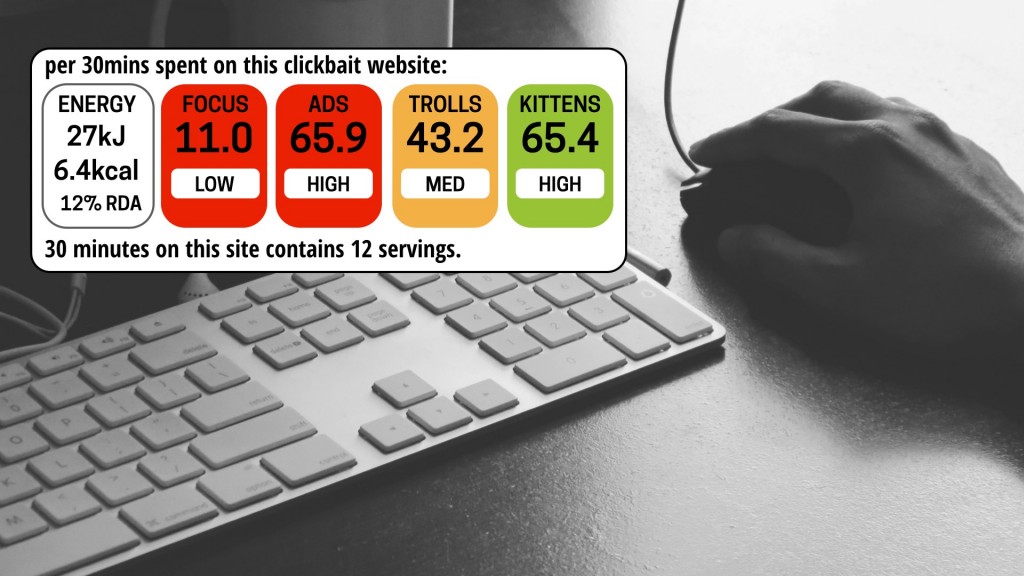 And to get there we will need to really up our collective understanding of the impact of our technology on our minds. We now have all the tools and science to do it, we now need the collective will to make it an issue. So that we hold the industry to account and as consumers, just as food labelling tells us about what we’re putting into our bodies, we need to be as well informed as possible about what we’re doing to our minds. 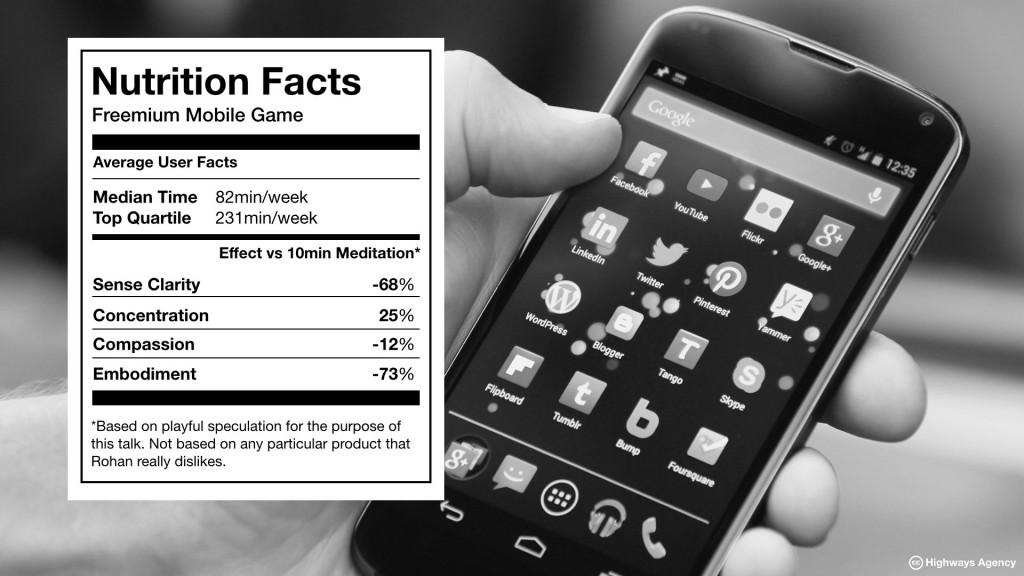 This is the future I am interested in – informed consumers on the impact of their digital consumption on their minds. This might look like a long way away but as we’re going to hear after me, mindfulness is becoming a political issue so we’re on our way. (Thanks to Adrian Hon for the inspiration for the food labelling idea).

So I’m excited, I’m optimistic. And the reason for that is that as someone heading up a company in the space, I’m seeing the community of people and organisations thinking about this issue pretty seriously. And it’s not just the mindful technologists like me  – just in the last six months I’ve worked with two household-name technology companies about how these ideas can be incorporate in mainstream consumer tech so that’s exciting. All of which makes be believe that we’re seeing the emergence of a new discipline of awareness-centred design that will be the way stuff gets made in the 2020s, just as user-centred design has dominated the last 15 years.

So bringing it back to right now, sitting here. Whether you’re a maker, an investor, a politician or a consumer – we all have to make a decision. And in a way it’s the same decision I faced in the forests of Thailand. When it comes to the challenges of technology and the mind, are we going to choose to retreat, put our head in the sands and just write off some of the key elements of modern life as anti-mindfulness? Or are we going to jump right in and re-design and change the conversation for both us and future generations?

I made my decision then and I make it again today. And while it’s not an easy road, I know I made the right choice.

And I’d like to bring it all back to our own practice. The majority of people into mindfulness tend to use the body and the breath as the main domain of practice. This is obviously a great place to start. But if we want to become more literate in how our minds get pushed about, we should also look to deliberately practice mindfulness of mind – in which we watch our minds like we’re watching TV and by doing so learn so much about the nature of awareness.

When we practice in this way everything that arises in our consciousness becomes an opportunity for mindfulness. So that in the future, not only will our technologies be intrinsically designed to more supportive for our wellbeing, we will have the skills within us to include everything in our understanding of mindfulness. And that’s when every app is a mindfulness app.